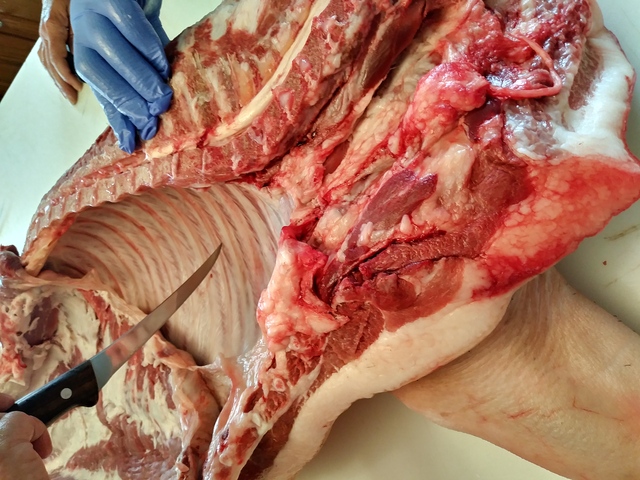 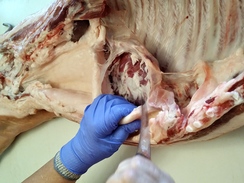 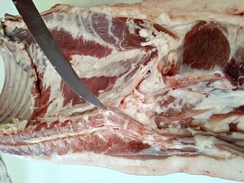 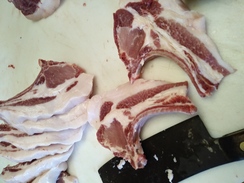 Chops - a favorite cut from the loin.

What is a ‘primal cut’, anyway?
Primal: from early 17th century Latin, the medieval word ‘primalis’ which refers to First.
Simply put, Primal Cuts are the first cuts made dividing the carcass into wholesale sections. This makes the carcass more easily managed for further handling either by the retail butcher or the chef.

It is worthy to note that hog butchery varies not only by country, but even by district. Butchers find their own ‘sweet spot’ of how they prefer to break down a carcass and you will too.

There are multiple ways to utilize a hog and when you chose some cuts you cannot have others. For example, to take the tenderloin out means that you cannot have porterhouse chops from that same side. To make your Butt into sausage means not having pork (blade) steaks and/or roast from that primal.
Therein lies the beauty of home butchery: your choices, your decisions, and your ability to use “everything but the squeal”. You can make some cuts from side A, others from side B, and have all the variety you can handle. Know what you are aiming for in cuts as this determines your course of action.
And remember even imperfect cuts will still taste great!

Your hog carcass was likely split in half at slaughter time. For this article we will assume that is the case.
Many butchers remove the leaf lard and kidneys first, setting them aside for high quality baking/pie lard and for adding the kidneys to their sausage. This is easily done by hand, pulling the stiffened fat away from the inside of the ribs (occasionally may need to use the knife to loosen a stubborn membrane).
The Head (the Fifth Primal):

The head is removed by cutting behind the ears, behind the jowls close to the jawbone, and between the atlas and the skull. The head is a fabulous, and much underutilized, jewel of the carcass. There is a large quantity of meat on the skull, and the jowl is a prize for curing (jowl bacon), so put your squeamishness aside and save that beauty!

The Shoulder Primal:
The shoulder is removed by cutting between the 5th and 6th rib. If making charcuterie then make your cut between the 6th and 7th ribs instead, giving you the longest coppa (longissimus dorsi) available.
Start counting the ribs from the head end, and using your breaking knife, cut between the ribs and through the cartilage of the breastbone and all the way to the vertebra on ventral side. Then bend the shoulder back over itself (cut spine to cut spine) toward the hind end and the joint of the vertebra will separate. Breaking down a carcass with a minimum of bone sawing is preferable as shards and bone dust as well as heat from friction is avoided.
The Shoulder can be further broken down into sub primals of the Butt and the Picnic. Saw through the ribs at the natural curve of the spine, through the meat with your knife, again with the saw to cut through the scapula, then finishing up with your knife. From those you can have roasts (either boneless or bone-in), sausage, pork steaks, spare ribs, hocks and trotters (feet).

The Ham Primal:
The ham is separated from the carcass between the last and second-to-last lumbar vertebras. First cut the flank away from the ham, following the contour of the leg, and fold it back over the belly. Insert your knife edge between the two vertebras and loosen the joint. Cut through the meat from that point around to meet up with your cut at the flank/belly. Then bending the ham over the spine towards the head, the joint will separate, and the ham will be loosed from the remaining carcass.
The Ham is further separated into the sirloin for roasts or steaks, fresh or cured ham, ham steaks, or sausage.

The Loin and Belly Primals:
Splitting these two primals will involve a bone saw to cut through the ribs. To determine where to cut, look at the eye of the loin and measure the diameter of the main muscle with the blade of your knife, then move half that distance down the rib and mark that spot with a cut of your knife. Go to the other end and do the same. Score across the ribs connecting your two cuts. Using your bone saw, cut through just the rib bones, then finish separating the two primals using your knife.
From the Loin Primal you can choose pork chops, boneless whole loin, loin chops, baby back ribs, and back fat and from the Belly you would have spare ribs, fresh pork belly, and bacon (you thought I would never get to bacon, didn’t you!?)

The American Guinea Hog provides the BEST pork and lard available! These great little hogs are a joy to raise, small enough to handle butchering at home more easily, and give you and your family delightful dishes for your table.

YouTube has a plethora of videos to watch, so spend some time searching and enjoying the variety of accents and methods seen there.

Written by Becky Mahoney and previously printed as an article in The Curly Tails, newsletter of The American Guinea Hog Association.
A sample newsletter can be seen at https://guineahogs.org/sample-newsletter/ .